OCEAN SIGNAL PLB IS A GODSEND FOR STRANDED FISHERMAN When Mark Bernucho left his Louisiana home for a fishing trip, little did he know that the tiny Ocean Signal PLB1 personal locator beacon he always carries would be so useful.

When the fishing was proving unproductive he decided to move to a new site, but the engine on his 20 foot aluminium V-Hull boat generated nothing more than a clatter and refused to run. Without mobile phone signal and without other means to call for help Bernucho extended the antenna on his PLB1 and activated it.

Personal Locator Beacons send out an internationally recognised signal to the Cospas Sarsat satellite system. Each beacon is individual coded and Bernucho had made sure his was registered with NOAA. Within 36minutes of activation, a US Coastguard helicopter was nearby, following its normal search pattern. Bernucho set off a flare to indicate his exact position. Within minutes the helicopter was overhead and dropped a radio down to him on a line.

Using the contact details provided to NOAA when he registered his PLB, NOAA also contacted his wife and kept her fully informed of the situation and confirming that he was OK.

Using the radio, Bernucho was able to call up a tow back to port, grateful for the effectiveness of his Ocean Signal PLB1 and the efficiency of the Coastguard and NOAA. Bernucho said after his adventure with the PLB1, “I asked the Coastguard if there was anything I could do. And the simply said ‘Spread the Word’”

The US Coast Guard website described PLBs as “lightweight, compact and easy to use, can instantly summon help and provide rescuers with precise location information” 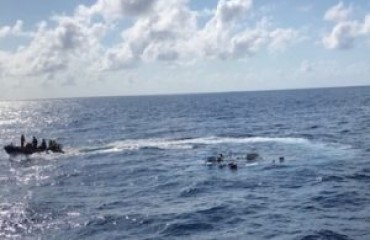 Two men rescued by the USCG after activating rescueME PLB